Shinichi Suzuki, born in Nagoya, Japan in 1898, was the son of a violinmaker. 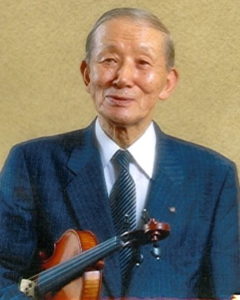 He studied violin for many years in Japan before traveling to Berlin in the 1920s to study with Karl Klingler, a pupil of Joachim. Upon his return to Japan, he and his three brothers formed the Suzuki Quartet. Soon after, he became president of the Teikoku Music School and the founder and conductor of the Tokyo String Orchestra. This allowed him to bring Baroque music to the audiences of Japan. He had a great interest in children and his observations led him to the realization that children from any country could freely speak their native language, regardless of intelligence. He saw that they could easily master over 4000 words by the age of five. He observed that children learn by many repetitions, and believed that any child has the ability to learn and achieve a high level of ability, if the conditions of their environment are conducive to learning, as they are for learning language. This philosophical perspective on education led him to develop a method of teaching.

Suzuki moved to Matsumoto near the end of World War II. There, he organized t 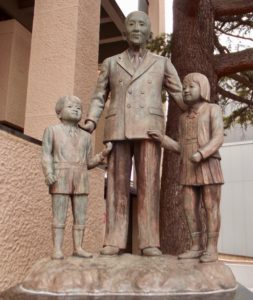 he Yoji Kyoiku Doshikai (Group for Child Education). With the help of the master of Hongo Primary School, he was able to put his new philosophy and method of teaching children into action. The experimental classes in Japanese, Chinese, expression, calligraphy, drawing, English and gymnastics were highly successful. Suzuki founded the Saino Kyoiku Kinkyu-kai in 1950, and began to teach violin playing with his method and philosophy. It quickly grew and by 1972, 2321 students had graduated from his school. The method, known as talent education, was so named because Suzuki’s philosophy was founded on the belief that “every child can learn,” and music study was for everyone, not just for those who exhibited signs of “talent.”

The Talent Education movement spread as other teachers studied his philosophy and method, in Japan and abroad. Materials were developed for other instruments, including viola, cello, bass, guitar, harp, piano, flute, oboe, recorder, singing, and early childhood education. Even after his death in 1998, his teaching lives on in studios, schools and institutes around the world, bringing the love of music to people everywhere.

Dr. Suzuki believed that every child can learn. This simple but powerful statement opens the door to the world of music to everyone, not just those who exhibit signs of ‘talent’ by a certain age. To quote Dr. Suzuki, “Musical ability is not an inborn talent but an ability which can be developed. Any child who is properly trained can develop musical ability, just as all children develop the ability to speak their mother tongue. The potential of every child is unlimited. Teaching music is not my main purpose. I want to make good citizens, noble human beings. If a child hears fine music from the day of his birth, and learns to play it himself, he develops sensitivity, discipline and endurance. He gets a beautiful heart.”

Where love is deep, much will be accomplished.
– Shinichi Suzuki

The Seven Concepts of the Suzuki Philosophy are:
1. Every Child Can Learn
2. Environment Nurtures Growth
3. Ability Develops Early
4. Children Learn From One Another
5. Success Breeds Success
6. Parental Involvement is Critical
7. Encouragement is Essential

click here to read “The 7 Concepts of the Suzuki Philosophy”  by Danette Schuh.

Parental involvement is of the utmost importance in the Suzuki method. The Suzuki parent is often called the “home teacher.” In the Early Childhood Education classes, the parent plays a vital role. In the private instrumental studio, the parent’s attendance at the child’s lessons is required, and the parent practices with the child at home every day. In many instances, the parent may begin lessons before the child in order to learn to create a musical environment in the home and to give the parent the knowledge necessary to repeat the lessons at home on a daily basis.

Suzuki instruction can begin while the child is very young. While it is never too late to learn, and Suzuki students begin at all ages, the method is an excellent choice for very young children. Many teachers consider the age of three to be the optimal time to begin instrumental lessons. Developmentally, children are very ready for music at this age. Even before the age of three, steps may be taken to create the right environment, beginning by listening to music even before birth. There is a Suzuki prenatal music listening program for expectant mothers, since we know the baby can hear and is learning even before they are born. The Suzuki Early Childhood Education classes for baby and parent allow babies and toddlers ages 0-3 to begin a life-long journey of singing, dancing and loving music, right from the start. The environment is nurturing and supportive, where each child is allowed to progress at their own pace. Skills are introduced in small steps so that each one can be mastered successfully. This is often referred to as “one-point learning”. There is a focus on positive reinforcement and the child is encouraged at each step, both in the early childhood classes and in the private instrumental studio lessons.

A cooperative atmosphere encourages learning. Teachers, parents and students are supportive of each other in a non-competitive way. In addition to private lessons, Suzuki instruction includes group classes. The positive peer interaction makes the learning process fun for children and is highly motivating. Older and more advanced students provide excellent role models, encouraging children to continue and advance in their musical studies. The students and the parents have the opportunity to support each other within the studio and the community.

One important factor in the mother-tongue approach is the fact that children learn to speak language long before they learn to read and write. They can also learn to play music long before reading and writing music as well. The Suzuki method is an ear-training based method. Children learn by ear while developing the physical skills of playing the instrument. Suzuki teachers expect their students to listen to a recording of their current Suzuki pieces many times every day. In this way learning the music is very natural and the student learns to “speak” music. All of the Suzuki repertoire is memorized. By this method, memorization is a simple and easy process.

Learning note-reading in the Suzuki method is handled in the same way language is learned. Children learn to speak long before they learn the printed word. Suzuki students will only begin to play their instrument from printed music after their ability to physically play the instrument has been developed. This allows the teacher, parent and child to focus on the elements needed to play the instrument well, a beautiful tone, posture, intonation, phrasing and musical style. The Suzuki repertoire is learned by ear, and note-reading is learned separately. Different teachers will integrate the note-reading process in different ways.

Building repertoire through review is vital part of the Suzuki method. When a child learns a word, instead of leaving it when they move on to a new word, they incorporate it into their vocabulary and continue to use it while building new skills. Suzuki students will add to their repertoire (the complete list of music that they have mastered) and continuously review the pieces they have previously learned. New skills are learned on familiar pieces, making the learning process easier and more enjoyable. Children learn by repetition and mastery of the literature is achieved through the review process. Through this process, the student quickly develops a long list of pieces that they can proudly play well. In the Suzuki Early Childhood Education (SECE) classes, the same set of songs and rhymes are used from ages 0-3. The repetition allows the children to achieve thorough mastery of the repertoire, vocabulary, and musical skills learned in class.

The Suzuki instrumental repertoire is a series of books and recordings of the curriculum developed by Dr. Suzuki. They begin with an emphasis on folk songs and familiar melodies, to increase the student’s enjoyment of learning. Works by the great masters of classical music are soon added. The literature is carefully chosen to teach musical skills and technique through the pieces, instead of dry technical exercises. Since all Suzuki students of the same instrument will earn the same repertoire, everyone has a “common language” and can play together. The SECE curriculum on the CD, Lullabies, Action Songs and Rhymes, was developed by Dorothy Jones and Sharon Jones, at the request of Dr. Suzuki.