Violist Katie Magill Carrington hails from Chicago, IL, where she studied with Mr. Michael Hining.  While under his tutelage, she soloed in Carnegie Hall with the Windy City String Ensemble, in which she also served as principal violist.  Katie also won the Illinois Wesleyan Concerto/Aria competition and recognition at the Chicago Viola Society.  In 2003, Katie began studies at The Juilliard School with Heidi Castleman and Hsin-Yun Huang.  She has been invited to the Aspen Music Festival as a fellowship student twice and also traveled to China with the Juilliard Orchestra.  After her Bachelor’s Degree was conferred in May 2009, Katie matriculated at Rice University to study with James Dunham and received her Master of Music degree in May 2011. For the past two years, she has taught in the CyFair ISD, Klein ISD, and KIPP schools in Houston. She is a registered Suzuki Violin teacher for violin and viola, for which she studied with Judy Bossuat-Gallic. Katie now plays in the Louisiana Philharmonic Orchestra in New Orleans and maintains a private studio. She recently was appointed the Artistic Director of the Greater New Orleans Suzuki Forum. Having been blessed with exceptional teaching, Katie strives to provide the same to her own students. 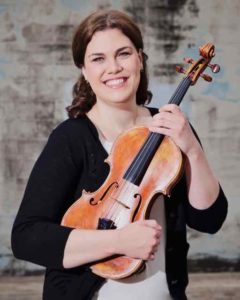